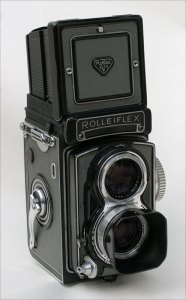 The Rolleiflex T was originally designed to fit between the budget Rolleicord and the Rolleiflex F models.The ‘T’ designation is understood to stand for Tessar as the camera is fitted with the cheaper 4 element lens often found on Rolleicords rather than the Zeiss Planar or Schneider Xenotar found on the ‘F’ models.Some say the T really stands for (T)heodor after its designer Theodor Uhl whose sevices were apparently dispensed with after the bean counters at Rollei saw his handiwork.That didn’t stop the camera becoming a success with a production timeframe of 1958-76 and about 127,250 units being made.My version of the camera comes in grey leather and judging by the serial number was produced in the early 1960’s as a rule of thumb most grey cameras are early (pre 1966) a majority of T’s are black.A list of serial numbers can be found hereshould you wish to date your Rollei.

The picture above shows the easiest way to tell the T model from a distance, it is the only Rollei with the shutter button on the side.Even though the camera is positioned between the budget ‘cord and the pro ‘flex it certainly has more of the Flex’s ‘genes’I’ve often seen people give the advice to get a Rolleicord over the T as the lenses are pretty much equal and the cords are cheaper, I’d advise that prospective purchasers should get a T as they are much better in daily use.Below is one of the main reasons I prefer the T to my Rolleicord

The view above graphically illustrates how much brighter the T is compared to a similar aged Rolleicord, no doubt later Cords have better screens but I’ve always found them duller and slower to focus.The Tessar lens is a design classic, less elements than the Planar and by some accounts not as sharp at the edges, but for the Portrait type work that TLR’s excel it is a wonderful lens.

Both of the above images were taken within minutes of ripping open the box, they were taken on Neopan 400 with guessed exposures.

Edit:
I’ve had the camera and just love it if you are teetering on the brink of buying a Rollei just do it!
I recently saw this quote on a Photo forum:
“Get a Rollei. Life is to short to have spent it with photography without a Rollei”.
©Text and Images Mark Antony Smith 2008

[If you like this blog, please take a few seconds to take a look of the ads below. Thank you. TLRgraphy will continuously collect the best information about twin-lens reflex cameras]